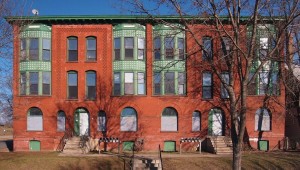 Euclid View Flats in St. Paul’s Dayton’s Bluff neighborhood, is listed on the National Register of Historic Places for its local significance in architecture. (Courtesy of McGhiever, via Wikimedia Commons)

The red-brick structure dates back to 1888, earning it praise from fans of St. Paul architecture. Many founding members of the East Side Boys gang lived in the building and called it home in 2002, according to several former leaders interviewed by the Pioneer Press. The gang became one of the biggest in the city.

The historic property, heavily vandalized in recent years, has been vacant since 2010. On Wednesday, the St. Paul City Council met as the city’s Housing and Redevelopment Authority and designated the Sand Co. as a tentative developer for the “red building,” which will be rehabbed into a dozen affordable units named Euclid Flats. Sand has until Feb. 1 to finalize financing, rehab costs and approvals for the estimated $4.5 million project.

Donate to Dayton’s Bluff or Pay for Services Through PayPal